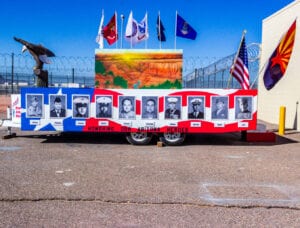 Each year the Phoenix Veterans Day Parade Entries compete for awards for their parade participation. Honors go to entries that have the best float, best band, best marching unit, best color guard, and more. Also, the Parade Team selects winners for significant awards that capture the memory of some of the parade’s founding principles. The awards are part of a lovely dinner banquet in the community.

Although the awards may be small in stature, they are big in creating camaraderie amongst military members and veterans.

Take the Arizona Department of Corrections float, for example. They provide the float supplies from funds donated by OneAZ Credit Union. These include materials such as wood, Styrofoam, paint, glitter, renderings and more to inmates incarcerated at ASPC-Lewis/Barchey Unit. The inmates then work together to transform a flatbed trailer into a beautiful float. This year was no exception. Their float had an eagle carved out of a block of Styrofoam, a colorful mural of the Grand Canyon, with a flag-waving motif and ten prominent portraits of Arizona veterans, including Senator John McCain, Pat Tillman, Lori Piestewa and others. Inmates who work on the float are students of a construction class provided at Barchey Unit by Rio Salado College. Thus, the partnership is perfect for creating a beautiful float entry.

“This has been an important collaboration for our inmates. It allows us as an agency to work with them to give back to the community. We work hard to ensure our entry is something unique to put on display in the Phoenix Veterans Day Parade,” said Arizona Department of Corrections Internal Communications Coordinator 1 Rusty Heaps.
Another moving parade entry is the White Mountain High School Marching Band. With this entry, Show Low High School Band Director Marshall Pratt pulls together four high school bands from their area. He has them obtain an imprinted white t-shirt for parade day wear and transports the students to Phoenix to participate. Each year their participation has grown and this year they were 150 students strong.

The Frank Luke Junior Memorial Museum entry carries on the legacy of Frank Luke Junior, the first airman ever to receive the Medal of Honor. You may know of his legacy since Luke Air Force Base bears his name. Bill Simon and his “Desert Warriors” create this entry that includes various military vehicles, a flatbed trailer carrying a “Huey Helicopter” and of course, memorabilia in honor of Frank Luke Junior.

The Parade Victory Party tries to capture the spirit of patriotism, regalia, march, and camaraderie in selecting the winners. But perhaps it is all who participate that leave an indelible impression on our veterans and our community.

Contributor Info: Credit/Contact Info: Paula Pedene is the Phoenix Veterans Day Parade Coordinator for Honoring America’s Veterans and contributor for the Veterans Voice Column. You can reach her at paula@pedene.com.