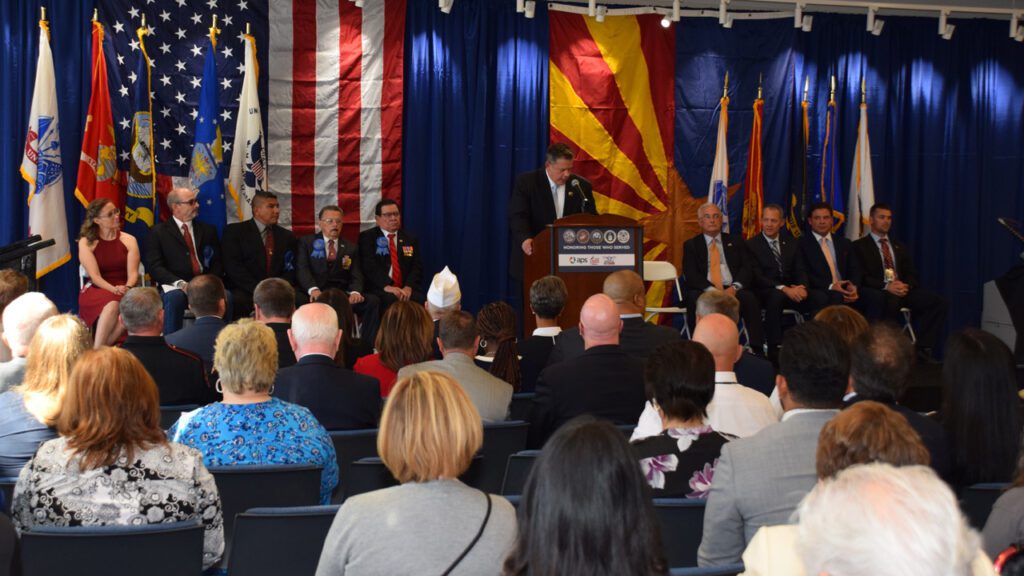 The Phoenix Veterans Day Parade has been a passion of mine for more than two decades. When we started this event in 1997, we had no idea that it would grow into one of the largest of its kind in the Nation. But beyond the beautiful floats, vintage cars, marching bands and pomp and circumstance one might expect at a parade of this magnitude, we’ll honor a very special group of individuals that represent all Arizonans who have worn the uniform of our great nation – The Veteran Grand Marshals.

Each year, the parade steering organization, Honoring America’s Veterans (HAV), in partnership with KTAR Radio, hand picks veterans to be grand marshals. These veterans have served in each conflict, and we celebrate them at the parade and during events leading up to Veterans Day. Sometimes this experience provides a boost to these selfless individuals, and other times it changes a life.

About six years ago, APS created a special Veterans Day ceremony recognizing the Parade Grand Marshals, which takes place in the days leading up to Veterans Day. APS employees, who are also veterans, host our Grand Marshals, their families, and other veterans for a ceremony featuring guest speakers which have included senior military officers and political leaders like Senator Jon Kyl and the late Senator John McCain. They also feature one of our Grand Marshals, who share their stories of service and sacrifice, providing for a touching moment during this very patriotic event.
The proceedings leading up to the parade always keep the spotlight firmly on our Veteran Grand Marshals, ensuring we properly honor their service, and with them, the service of all those Arizona veterans who they represent from our nation’s conflicts. Honoring America’s Veterans is proud to be a recipient of their kindness, but when the dust settles and the parade floats are retired for another year, it is fond memories made for our Grand Marshals that live on.

We are blessed to have amazing volunteers to make this APS Grand Marshals event and the Phoenix Veterans Day Parade happen. We are grateful to our City government that embraces this event with open arms. We are also grateful for the support of our business community which makes a difference for HAV. This includes companies like the University of Phoenix, USAA, General Dynamics, TriWest Healthcare Alliance, and Arizona Public Service. Their support with financial resources, volunteers, HAV board members and more has been tantamount to the success and growth of this event.

You can see these Veterans Grand Marshals in the parade which will take place on Monday, November 11 at 11 a.m. on the streets of Phoenix. For more information go to www.honoringamericasveterans.org.